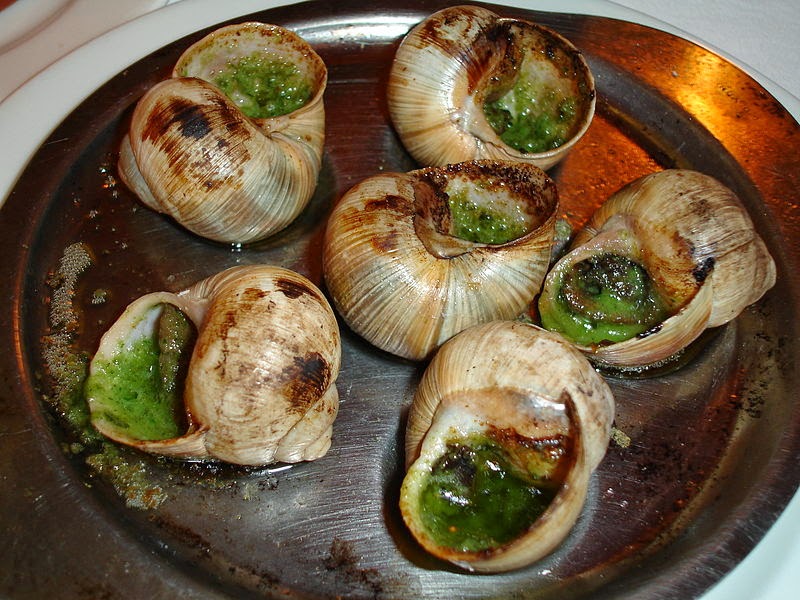 Three foods which have remained in the Greek diet continuously since antiquity are snails, pork and roasted sesame seed toffee in honey (pasteli). Galen, a Greek medical author in 2nd century A.D is reported as saying that all Greeks ate snails on a daily basis.

Apparently the habit of eating snails migrated from ancient Greece to Rome and from there to France and England. The traditional method of collecting wild snails is to wait until after rainfall when the snails have been flushed out into the open, from where they are easily collected. The snails are then kept alive for a few days to a week on a cleansing diet of thyme, water and flour to purge them from any poisons from food they may have eaten, and they are then prepared for consumption.

Millions of kilos of snail are eaten each year in countries as diverse as – Greece, Italy, Spain, Portugal, France, England,Germany and the US.

Snail farming is the 2014 success story of young entrepreneurial Greeks who have returned to farming as a way of dealing with the financial crises and unemployment. With the right education and determination a number of young Greeks have made a good living farming snails and have inspired others to follow suit.

There are about 116 different types of edible snails. It is possible to collect snails from the wild and eat them, provided you know which ones are edible and where to find them.

Studies on the nutritional value of snails have reported that snails are high in protein but low in fat contents. It is estimated that snail is 15% protein, 2.4% fat and about 80% water. Snails have high levels of health benefiting essential fatty acids such as linoleic acids and linolenic acids. A 100-gram serving of snails provides 90 calories. Most of the calories in a dish of snails come from protein. A serving of snails provides plentiful protein which, while not quite equal to beef or chicken, compares favorably with seafood.

Depending on the size of the business to be established the amount of land needed to farm snails varies. On as little as one square meter of land, it is possible to raise 200 breeding snails or 300 for fattening per year. For a professional scale however you would need 5-10,000m² of land approximately producing 1.25million – 2.5million snails. For an industrial scale of business you would need 10 + m² of land producing 2.5 million or more snails.

There are two main methods of snail farming. One is by using specially constructed containers that are often temperature controlled and where the snails have to be fed . This is the French system. The other method allows the snails to free range in an open enclosure. This is the Italian method.

Snails have many predators such as mice, rats, snake, all of which can easily cause serious damage to a snail farm. Farmers are advised to surround snail enclosures with deep solid fencing and use Helitex, a charcoal based netting which deters predators and helps prevent snails escaping the farm.

Snails are omnivorous meaning that they eat from both plant and animal sources. They are not difficult eaters.

Is it common for the french to eat snails?
http://wiki.answers.com/Q/Is_it_common_for_the_french_to_eat_snails#slide=1
What is the history of eating snails in France?
https://uk.answers.yahoo.com/question/index?qid=20081029105347AAPrmRs
A Taste of Ancient Greek Food
http://www.departures.com/articles/a-taste-of-ancient-greek-food (A Taste of Ancient Greek Food)
Snails as food
http://www.snail-world.com/snails-as-food/ (Snails as Food)
Snail (escargot) nutritional value
http://www.dietaryfiberfood.com/protein/snail-escargot.php (Snail (escargot) nutritional value)
Nutrition of Eating Snails