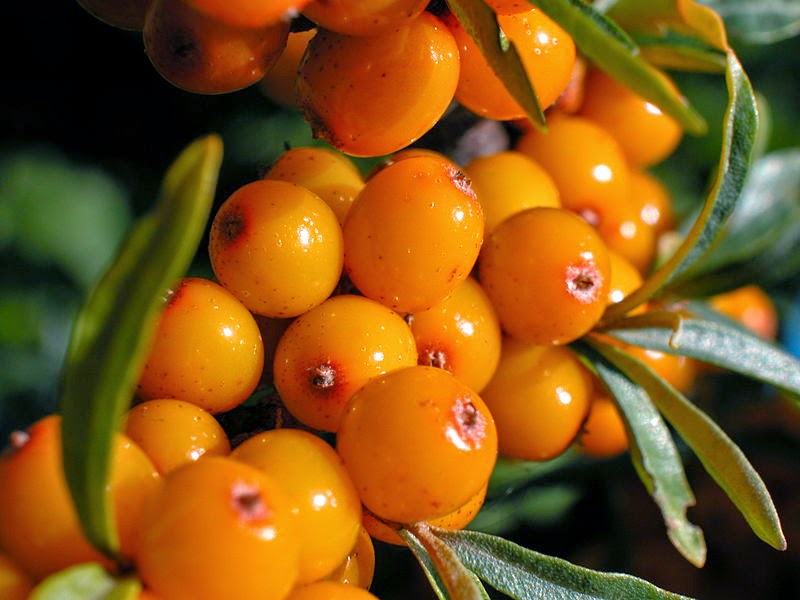 As the story goes, towards the end of Alexander the Great’s military career on his way back from India and his last conquest in around 324 BC, he headed for home with the main body of his troops through the Gedrosian Desert and Makran region (now part of southern Iran and Pakistan). Toward the latter part of the march food and water rations were greatly depleted and both troops and horses started to die. The troops passed a region were ippofaes grew wild. After feeding on the ippofaes the horses miraculously recovered full vigor and regained their shiny coats. The name ippofaes is derived from the two Greek words Ippo (horse) and faes (meaning shiny).

Its seems that the 11th century Mongolian General Genghis Khan also relied on this plant. The fact of the matter is that ippofaes grows easily in many conditions many of which are harsh. It grows from one end of the world to the other.. from China to USA and most points in-between. It is not known to be a difficult plant.

“Sea buckthorn also contains the strongest antioxidant profile of all superfruits including superoxide dismutase (SOD), the super antioxidant, as well as flavonoids, polyphenols, and over 190 phytonutrients. Alongside its host of vitamins and minerals, it provides every essential fatty acid with Omega 3, 6, and 9 from a vegan source.” ( ippofaesplus. 2014)

There are 7 species of Ippofaes which grow in many climates and conditions. It is a tall thorny bush with bright orange berries. Russia has produced a thornless variety which makes harvesting easier.

The main difficulty in the cultivation of ippofaes is in the harvesting. It is difficult because the berries don’t have storks and so are hard to extract from between the thorns. Farmers break off the branches to access the berries but this puts berry growth back a season. The further difficulty is finding the exact ratio and spacing of male to female plants so that pollination is maximized.

Greece is in the early years of cultivation of ippofaes as a crop.

Location of Ippofaes Plus Orchard