If petrol costs too much, why not use LPG (Liquefied Petroleum Gas) fuel?

Sometimes filling up your car can feel like you are emptying your wallet” says a slogan, and this is true even when you are buying the cheapest petrol on the market! 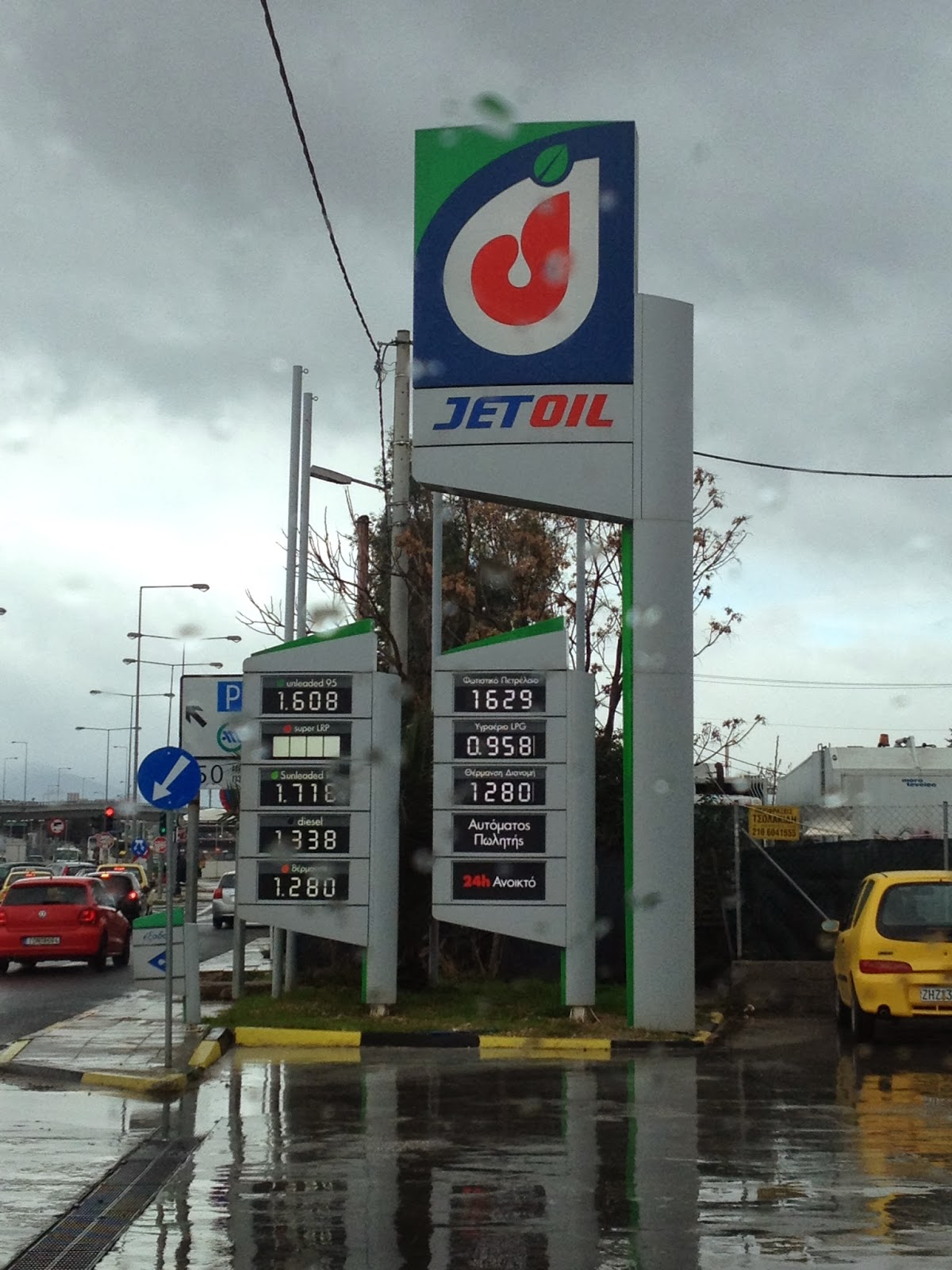 Petrol stations in Greece report that it is quite normal practice in Greece at the moment for people to top up with only 5- 10 Euro at a time. People have been forced to economize on everything due to the financial crisis, so why are more people not thinking of converting to LPG fuel which is almost half the cost?
In neighboring Bulgaria , 35% of cars have converted to LPG, in Greece the number is around 2%, according to Mr George Iliev , President of the Bulgarian Autogas Distributors Association who opened an LPG conversion shop in Athens 2 years ago.
“ People just don’t understand how easy it is and how good it is for both car engines and the environment”.
Lack of information about exactly how LPG works and fear of the unfamiliar mean that most motorists stay with Unleaded 95 petrol, believing it to be their cheapest option. Others avoid car use all together.
LPG fuel technology could provide people with excellent low cost fuel, which according to Mr Anargyros Lagos (BP Distributor and LPG systems outfitter) leaves a car engine oil so clean that it is almost transparent when serviced. On the other hand when a car which has burned Unleaded fuel comes in for an oil change the used oil comes out black. LPG is good for engines, good for the environment and roughly half the price of petrol. LPG in Greece as at Dec 1 2013 costs €0.896 per liter, compared to Unleaded 95 which is around €1.645.
A full tank of an average sized car typically holds 57 liters of fuel (15 gallons approx) so with every fill, a motorist could save around 43 Euro each fill.
Three factors appear to be contributing to this lost opportunity for cost cutting by changing over to LPG;
How Does it work ?
LPG systems in cars work as an addition to the existing fuel igniting system which all cars except diesel have. Unlike Diesel though they do not need a whole new engine, simply an addition. They are easily installed, and there is plenty of space under the bonnet of any car for the system to be added. A fuel tank about the size of a spare tyre or medium sized gas bottle is installed in the rear of the car. It is completely safe and in fact less likely than unleaded fuel to explode in the case of collision.

LPG technology in cars has seen impressive steps in its development. Although currently LPG gas fueled cars still need to start and warm up using unleaded fuel, prototypes already exist and will soon be coming onto the European market, which are able to start directly in LPG mode.

Prices Increases?
Even at half the price of Unleaded 95 petrol, LPG in Greece is higher than it could be.
LPG is particularly sensitive to fuel cost increases because to get LPG you need to refine unleaded and the other types of petrol (Diesel) first. At the present storage tanks at the refineries are full because the demand for auto fuel overall has fallen. Since Unleaded and the other types of fuel aren’t being refined LPG isn’t being produced and in order to meet the demands of the market LPG has to be imported. Importing costs therefore lead to further price increases. 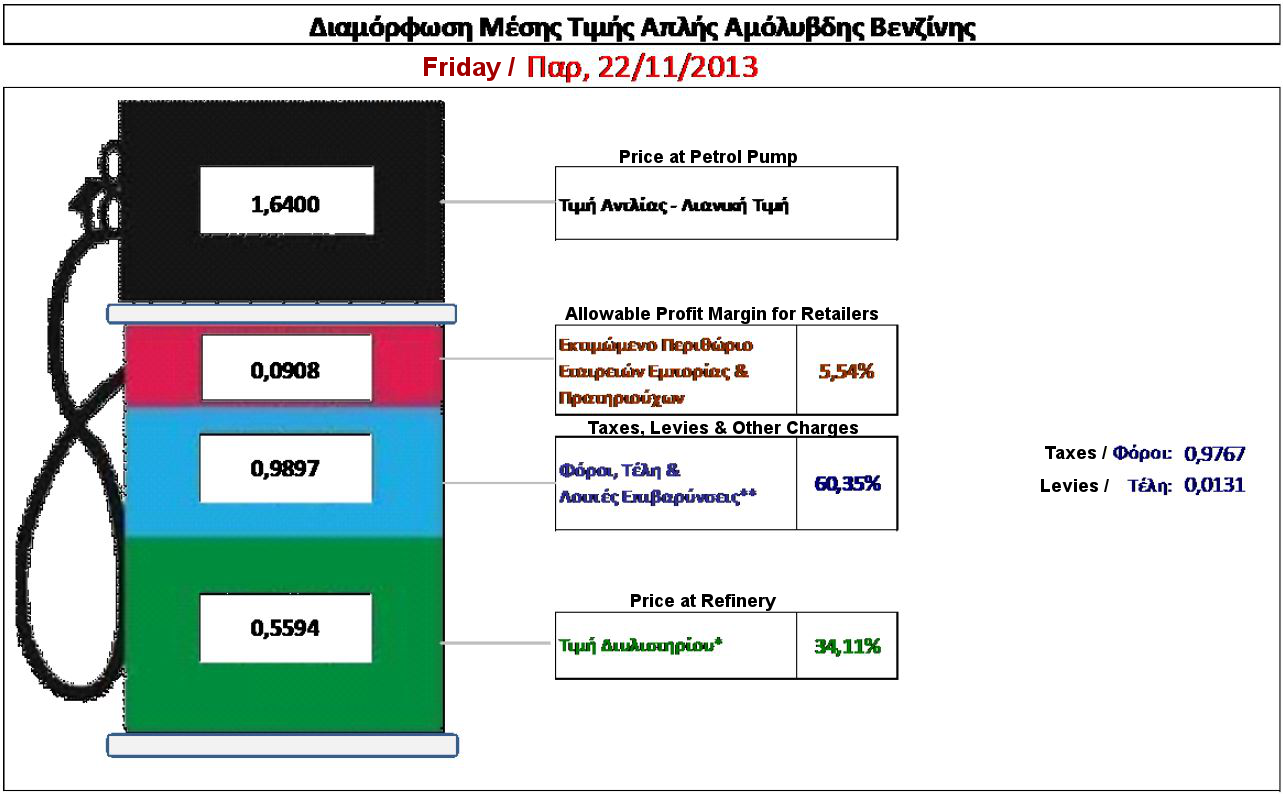 The above diagram from the Hellenic Ministry of Development & Competitiveness shows the 3 taxes and 2 levies (blue) and discretionary profit margins (red) which are added to the cost of fuel at the refineries. The taxes alone are almost 1 Euro per liter. Each time the government raises the taxes on fuel it adds to the already high costs and so the price of fuel inevitable rises and demand falls. Demand fall leads to to less income for the government on fuel taxes so they then seek to make up that loss by further increasing taxes to cover the income gap. Compared with Greece with LPG at 0.896 Euro, in Bulgaria, it costs 0.698 Euro (20 cents cheaper) and in Poland 0.593 Euro (30 cents cheaper).
The number of taxes and their constant increasing can to some extent explain the lack of trust in the future of fuel prices which underlies some reluctance on the part of motorists to invest in systems. People, it seems readily believe that the government cannot be trusted to ensure long terms stable prices, and believe that the government might raise LPG prices unreasonably.
Upfront Costs.

All the experts I spoke to were adamant that it is not worth buying cheap LPG systems, A high end Italian system can cost up to €1200 and this is a large enough amount in the present economic climate to put many people off. If one could be sure of saving 43 Euro on each full tank, then more people might be willing to make the long term investment. As things stand with Government policy and cost increases, they are not.